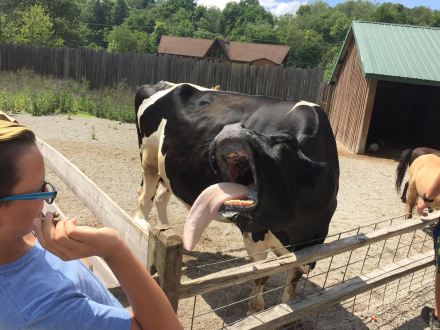 Tomorrow I turn 42 years old. I will celebrate this day with my husband and my three kids. We will eat cake and laugh and there will be presents and it will be just like every other birthday…except it won’t because behind all the cake and laughter and presents I will be holding my breath, waiting for the other shoe to drop. Waiting for someone to take it all away. The marriage, the security, the kids.

After all, this is Donald Trump’s America and anything is possible.

People caution me to “wait and see” or they tell me I’m overreacting. “Donald likes the gays,” they say. They post a link to some article from US Weekly with photos of Donald at some swanky Hollywood gay wedding. They remind me of that time on the campaign trail when he mentioned the letters LGBT. They click their tongues and they look down their noses and they dismiss my fears in a way that only someone speaking from a place of safe privilege can.

I am a drama queen.

Lately I find myself prone to daydreaming. It happens everywhere. At my desk. On the bus. At the dinner table. I can’t control it. One minute I’m present and the next minute I’m lost in some fantasy world. I suppose it’s a coping mechanism, an outlet for all my newfound fears and anxieties.

Sometimes I am a ruthless assassin. I chop and kick my way through a sea of racists and xenophobes like an extra on the set of Crouching Tiger, Hidden Dragon. I Matrix-walk across the ceiling, dropping down on to an unsuspecting white supremacist moments before snapping his neo-Nazi neck. I am a gay Jack Bauer engaging in hand-to-hand combat with every traitorous Democrat who mentioned Hillary’s emails and fed into the media narrative that she was a weak candidate.

In another fantasy I am the leader of a resistance. A million (wo)man army. We meet in subway tunnels and we dress in grey and it’s always raining. Our mission is simple: we have each been tasked with taking out one Trump voter. We don’t kill anyone…instead we just give them a pill that puts them into a semi-permanent state of sleep where they will remain until such time as doctors have figured out a way to cut the asshole out of their brains. Once cured of their inhumanity, they will be awakened and given the opportunity to join our new country where everyone is welcome and celebrated, even gay black Muslim women from Mexico.

But of all my dreams my favorite is the one where I am Kellyanne Conway. I’ve hired a stylist and I’ve built a time machine so I can go back in time to Inauguration Day and wear something appropriate. I’ve cut my hair into a stylish bob and dyed it jet black. I’ve learned how to apply make-up correctly. Everyone wants to dress me and Jennifer Lawrence is my best friend. The country loves me and the President is in love with me. He respects me so much he even asks before grabbing my pussy. Donald is obsessed with me. He hangs on my every word. He no longer listens to that fat neo-Nazi and ever since he banished Melania back to Croatia and lost Ivanka in that poker game to Putin, the only advice he seeks is my advice.

One day, after an especially aggressive kitty grab, he turns to me and says, “KC” — he calls me KC — “KC, I’m not very smart and if I’m being honest I have a shockingly small penis. Also, I’m in way over my head. I don’t know what to do. I don’t know how to be president. Tell me what to do.”

At last! I seize my moment. I lean in, I push back the hair thing on his head, I rest my perfectly manicured hand on the side of his puffy face and I whisper, “Be kind, Donald. Just be kind.”