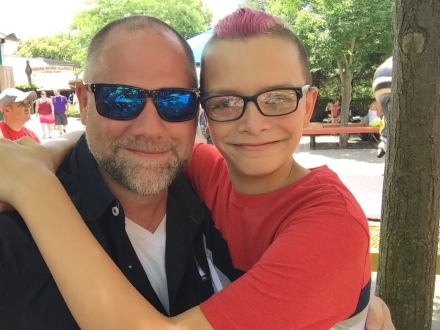 A few weeks ago my eleven year old son told me he was gay. He didn’t announce it or deliver the news in a very special episode of Blossom kind of way; he just told me. It was all rather nonchalant and matter-of-fact.

I thought back to my own coming out. Lacking the courage and confidence of my eleven year old son, my “I’m gay” moment did not occur until I was 20. This was back in the days before texting and emails when people still made phone calls and wrote letters. Not having the courage to make even a phone call, I wrote my parents a letter. As I recall it was a very dramatic letter and while it read like a novella my message could have been just as easily summed up by those two simple words, “I’m gay.”

A few weeks after sending the letter, a few weeks after not hearing from my parents, I called my mom to ask her if she had received my declaration. She said something to the effect of, “Oh yes. The letter. Well, I don’t think you really know who you are. You’re only 20.”

A year later I came out again, but this time I delivered my proclamation face-to-face. True to form my mother launched into the first act of her five act opera, titled How Could You Do This To Me? (I Love Drama!) If memory serves she even worked up a few tears. In her defense, it was a different time and her reaction was not mean, or unusual, just dismissive and a bit selfish. Like I said, this was back in the days when people still wrote letters…before Ellen came out, before Will & Grace, before parents realized that having a gay kid made them sound interesting on social media.

Eventually we all moved on and my “I’m gay” moment became less “How could you do this to me?” and more “Well, of course you are, you big silly faggott!” My moment exists in another life…in a world my eleven year old son would neither recognize nor understand.

The truth is I don’t care if my son identifies as gay or straight or a platypus or any of the other letters in the ever-expanding LGBTQIA rainbow soup of sexuality.

A month or so before his “I’m gay” moment, when he was clearly flirting with the idea of telling me “I’m gay,” my son asked if I wanted for him or his brothers to be gay. I laughed because it was funny and ridiculous and also because it sounded like an excerpt from the 2016 RNC platform, you know, the chapter by Mike Pence titled Gay Parents Turn Children Gay (The Earth is 5000 Years Old).

And while I know he won’t always be happy every day of his life, I do know that right now he is happy because he’s eleven and he doesn’t to have hide or feel ashamed or pretend to be someone he isn’t. He gets to be himself. He gets to be honest. He gets to say, “I’m gay,” and have his dad respond, “Okay. Cool. So what do you want for dinner?”

No consideration. No condemnation. No teary third act aria.