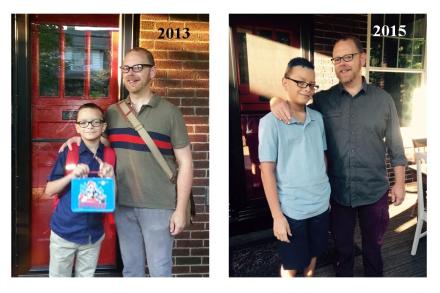 Indulge me as I wax nostalgic. Yesterday was the first day of school for Chris. Like all American parents obsessed with capturing every moment of their child’s life I immortalized this event with a photo. At first glance the photo is remarkably unremarkable. In it a very tall nine year old boy in a generic school uniform poses for the camera with his Papa in front of a red door and brick backdrop. The boy has glasses. An obligatory smile is plastered across his face. His hair matches the color of his shirt. He carries a messenger bag.

The photo is forgettable.

The photos are not identical. There are superficial differences. The boy from the first first day is seven years old. He is much smaller. His hair does not match the color of his shirt. He carries a cartoon lunchbox.

But if you could go inside each photo and talk to the boy, then at seven and now at nine, the differences would become less superficial and more significant. Seven hundred and twenty-five days ago Chris clung to me on that first first day of school. He wanted nothing more than to stay with me as he had stayed with me every day for the preceding eight weeks since that day he first came to live with us. Two years ago on that first first morning I abandoned him. Uncertain and afraid I watched as he tearfully walked his death march into the second grade.

But that was then.

Yesterday my son declared that this was going to be a good year. He announced that he would be the most popular boy in school. There was no death march on this third first day, only confidence as he walked his way smiling into the fourth grade.