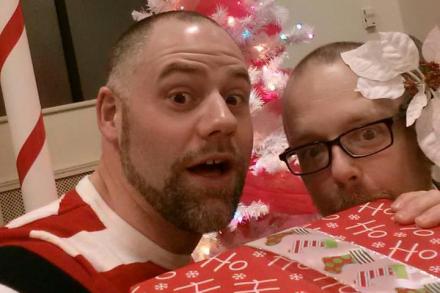 If you have ever had the misfortune of finding your radio dial stuck on some conservative talk show or, worse, your TV inexplicably tuned to Fox News, then you have probably heard some blowhard babbling on about The War on Christmas.  Now I’m not sure about the specifics of this particular war as it doesn’t involve 9/11 American-hating terrorists or red-and-green plaid awareness ribbons, but from what I can gather based upon the two-and-a-half minutes of research I did on Wikipedia, it has something to do with putting the Christ back in Christmas.

These fringe lunatics like to speechify about how wishing you Seasons Greetings is an unconstitutional affront to your God-given American-right to be wished Merry Christmas.  They argue that the tree on display at the public courthouse where the manger used to be is a big old anti-American (possibly homosexual) kick in your Christian groin.  But that, friends, is a lie.  Oh, I’m not saying The War on Christmas isn’t real.  It is real.  As real as Kim Kardashian’s humanity.  But this war has nothing to do with Christ or Kardashian.  This war is about one thing and one thing only: The Christmas Shoes.

For those of you not in the know, The Christmas Shoes is a “song” about a little boy who wants to buy his soon-to-be dead mother a new pair of shoes so that she can avoid embarrassment when she meets Jesus later that night.  The details are sketchy, but the implication is that Jesus either has a footwear fetish or he’s just been named Joan Rivers’ replacement on Fashion Police.  (It’s also possible that the line when mama meets Jesus tonight hints at a clandestine Jesus-Mother rendezvous, but I rather doubt that.)

Anyway I’m never quite sure why the boy doesn’t just go to the Salvation Army and buy her a used pair of Doc Martens or at least try Famous Footwear for a pair of knock-off Christian Louboutins, I mean, do you even need shoes in heaven?  Whatever the case may be, it’s up to an educated wealthy white guy to save the day.  It’s basically the plot of The Blind Side, except the black kid is a white boy and Sandra Bullock is Rob Lowe (or at least was in the Lifetime movie version of the song).

The “song” is written and performed by some “singing group” called New Song.  Now I don’t know who these New Song people are — although a quick Google image search suggests that New Song might actually be Christian music-speak for closeted homosexual —  but let me just say this: New Song is dangerous and they must be stopped.

They and their saccharine-sweet lyrics and their nonsensical narratives and their bland optimisms and their lazy rhyming (time/line, out/about if you’re Canadian).  Understand that New Song, and New Song alone, is the real enemy to Christmas.  Not the clerk at Rite-Aid who had the politically-correct audacity to wish you A Happy Holidays even though she knows you to be a Merry Christmas-loving Christian and not some Hanukkah-celebrating Jew or, worse, a 9/11 American-hating terrorist.

New Song should offend us.  When they sing, I knew I’d caught a glimpse of heaven’s love as he thanked me and ran out/I knew that God had sent me that little boy to remind me what Christmas is all about, we should all stab out our eyes in collective protest.  I don’t care how not cynical you are, I don’t believe for one minute anyone truly buys into this pre-fab feelgoodery.